Secret Obsession is out 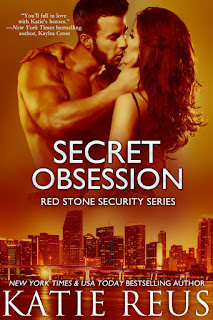 The latest Red Stone Security book has released! Secret Obsession can be read as a stand-alone (as all books in the RSS series) so if you’re new to this world, you can pick up any book, in any order.

Since she moved to Miami, Raegan Taylor has desired Ford Burke–a sexy and rugged cop. He’s everything she’s ever wanted.  Unfortunately for Raegan, Ford’s kept his distance.  But when a night out goes extremely wrong, his protective instincts kick into high gear, and he finds himself fighting for her in more ways than one.

She’s exactly what he was trying to avoid.

Once Raegan and Ford grow closer, the harder they start to fall for each other.  But Ford’s past stirs up feelings he just can’t control, threatening to destroy everything they’ve worked for.  And when he screws up, he may lose more than just his one shot with her.

And now someone’s ready to ruin it all.

Someone wants Raegan—and if he can’t have her—nobody can.  He’s waiting.  He’s watching.  He’s lurking.  Ready to strike. He’ll make her his.  He’ll take down anyone who gets in his way—even a cop.